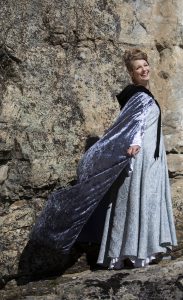 Tracy performs with orchestras, chamber ensembles and a cappella vocal ensembles, and is increasingly in demand as a concert recitalist, known for her vocal agility, clarity of tone and sensitive interpretations.

Tracy presents concerts in North America, the UK and Tunisia with A Song for Hope/Chansons Pour L’Espoir concert series, including performances at the British Embassy, Palais Ennejma Ezzahra, Sfax Municipal Theatre, and at universities, community halls, schools, churches and theatres.

Tracy holds a Bachelor of Music, Vocal Performance  (with distinction) from the University of Alberta and an A.R.C.T. (Associateship Degree) in Singing, Performance from the Royal Conservatory of Music, Toronto.  She was an Artist in Residence at Regent College, Vancouver, in 2019 and she is a member of the BC Registered Music Teachers’ Association.

“Tracy Fehr was amazing–glowing voice and such a natural performer – and can dance as well!…” – “Tracy Fehr has a superb voice” – Ticketmaster audience review

“A classically trained lyric coloratura soprano, Tracy came all the way from Canada to perform under the theme, “Song  for Hope…”  -Tunisia Live.net

“… A delight both to listen to and to watch” –  audience review, Tunisia Live.net

On March 5th, 2011 Tracy received an Arts Award at the Sowins 6th annual Women Front & Centre Awards Dinner and Gala in Penticton, BC. With this award came a beautiful original piece of artwork by Laila Campbell.